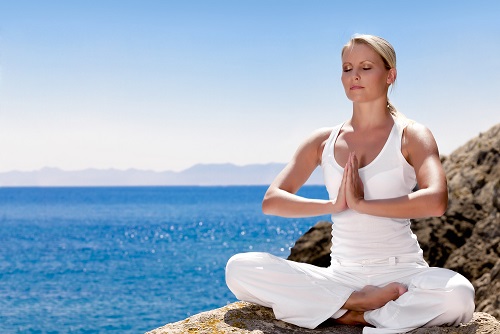 Roughly four million American adults experience panic attacks, according to the National Institutes of Mental Health. While therapy, medication, a good diet and plenty of exercise are commonly prescribed for panic disorders, meditation is often overlooked. But it shouldn’t be. Filtering one’s thoughts can prevent, or stop, panic attacks just as effectively as any other technique. Although there are a few ways to meditate the panic away, mindfulness is especially effective for panic disorders that are enabled by contemporary culture.

This type of meditation emphasizes the non-judgmental awareness of one’s thoughts as they arise. It also directs your awareness to the present rather than the future. Since panic attacks are generally caused by an overwhelming fear of a hypothetical future, mindfulness can be incredibly beneficial in such situations. When the feeling of panic strikes, people who have learned mindfulness techniques can investigate the panic, decide that it’s not worth being stressed about, take deep breaths to relieve the physical discomfort that accompanies a panic attack, and focus on their breathing to release negative thoughts and ground themselves in the moment. Mindfulness masters like Dr. Jon Kabat-Zinn can literally visualize the negative thoughts coming and going away, thus freeing themselves of suffering. Once this practice has been repeated and mastered, they will have control over the panic disorder, rather than the panic disorder controlling them.

While there are countless causes for panic disorders, many experts agree that social media can exacerbate the anxiety symptoms that lead to panic attacks. This means that the cultural component of panic may be larger than in previous generations. People who use Facebook, Instagram, Twitter and Snapchat may be susceptible to feelings of inadequacy, dissatisfaction and paranoia: inadequacy because they compare their lives to those of the more affluent social media users; dissatisfaction because social media highlights events that they wish they could have been a part of; and paranoia because social media is a sensationalized version of the news. Since children devote a larger portion of their lives to social media than adults (2 hours 55 minutes a day for Gen Z versus 2 hours for Gen X, according to Global Web Index), they are more at risk of these social-media inspired cognitive distortions. To curb these feelings before they conspire for an all-out attack, both children and adult social media users should engage in mindfulness. In fact, meditation sessions can be a family affair. Parents can introduce mindfulness techniques to their children: members of a generation that is, according to the APA Stress in America survey, 12 percent more likely to report poor mental health than the generation that came before.

Once meditation has been incorporated into an individual’s self-care routine, there is no limit to what he or she can accomplish. Think of mindfulness as a superpower that is activated whenever its host is feeling mentally unwell. Meditation doesn’t only work on panic attacks, but on anxiety, depression, addiction and everyday stress and sadness. This person is then able to thwart negative thoughts of any kind with rationalization, deep breathing, and moment-by-moment awareness.

Although panic disorders are most often associated with adults, they can be experience by anyone, especially if they are entrenched in social media. While social media is not the sole cause of generational anxiety, it’s definitely an enabler. Luckily, mindfulness exists as a counterbalance.

Also please review our Meditation Instructor Certification and see if it matches your educational and professional goals.

And why the ancient practice might still get trendier

Sourced through Scoop.it from: time.com

Meditation is becoming more and more mainstream everyday.  From business to personal, meditation is found everywhere and in all aspects of life, both spirirtual and non.

In the meantime, please enjoy the blog and articles and any of our social media sites.  We have many articles on meditation also on Facebook, twitter and Google plus.

We will gladly answer any questions!

Right now, you are probably compiling your list of New Year’s resolutions for 2016. But there really should only be one thing on your list — and that’s to meditate more. We could all stand to do a lot more of it, and some of us have never even given it a try.

Sourced through Scoop.it from: www.bustle.com

A great New Year’s resolution would be to meditate more.  This article lists some reasons why you should consider making the next year more meditative.

On a Wednesday afternoon in early May, after a full day of studying the Byzantine Empire and sitting through lessons on annotation and critical readi

Sourced through Scoop.it from: www.huffingtonpost.com

If you would like to become a meditation instructor, then please review the program and see if it matches your academic and professional needs

The article, “Are You Walking Your Mantra?”, by Ora Nadrich states

“If we all walked around holding a beautiful mantra in our mind, imagine what kind of “spiritual transformation” we would be creating collectively.”

Allowing your mantra to take root and produce fruits in your daily life is key.  The grace of God can come through and help you do the good you intend or the happiness you desire. This is why it is important to live your mantra and not just speak it during prayer.  Quick recitation or skipping steps can disrupt the positive effects that meditation can give you.  The words need to have meaning and be carried out of your quiet spot.

In the meantime, please enjoy our blog and articles and if you have any questions, please let us know.

The articles, “5 Tips To Start A Meditation Practice”, by Christine Imfeld states

“I always run into people who are dying to adopt a meditation practice but have no clue how to get started. It’s too hard to sit still. Or there’s no time to meditate.”

You might need to become a meditation instructor to achieve your goals of starting a meditation business but your ambitions have only just begun.   In order to run a successful meditation practice you are going to need to follow these 5 basic steps.    Once you have mastered them you should be on your way to having a successful practice.   Teaching meditation can be both rewarding and profitable.