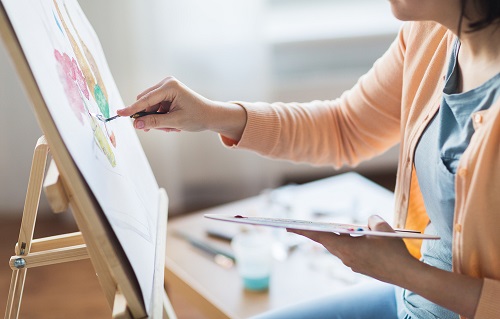 Depression affects up to 20% and anxiety 10% of people with cancer, compared to 5% and 7%, respectively, of the general population – as per a 2018 study (by Alexandra Pittman), published in the British Medical Journal. Treating these mental conditions is vital, say researchers, because when they are ignored, both quality of life and survival, are reduced. Specific types of cancer (e.g. lung cancer) are thought to release specific chemicals which are tied into depression, while some treatments (such as chemotherapy) are also linked to this mental condition. Because antidepressant medications can interact poorly with some cancer treatments, health professionals are constantly on the lookout for natural ways to combat anxiety and depression, especially in mild-to-moderate cases. Among a small group of therapies (which includes yoga and mindfulness meditation), art creation is also proving powerful, as found in specific studies.

Art Therapy Can Reduce Pain and Anxiety in Cancer Symptoms

A study (by researchers at Northwestern Memorial Hospital) published in the Journal of Pain and Symptom Management found that art therapy could quell a wide array of symptoms related to pain and anxiety in patients with cancer. The study involved 50 patients at Northwestern Memorial, who took part in the study for four months. During this time, said scientists, art therapy distracted patients from their disease, enabling them to focus on a positive activity they felt in control of. At the end of the study period, patients found that eight out of nine symptoms in the ESAS (Edmonton Symptom Assessment Scale) were reduced. These included depression, anxiety, drowsiness, shortness of breath, and poor appetite. The only symptom on the scale that was not alleviated, was that of nausea.

Art can essentially be practiced by people of all ages – not only those with talent. The advent of new digital technologies mean that the average tech user has many devices at hand that can help them create beautiful artworks. Those into pencil drawing, meanwhile, can find numerous tutorials on drawing faces, figures, and even nature forms – all with just a click or two of their tablet or smartphone. Therefore, art creation can extend to beyond the works created in a formal therapeutical setting. Art can become a hobby that fervent creators can get ‘lost in’ as they seize the present moment and use it to express their current thoughts and emotions.

A study undertaken this year by scientists at Drexel University found that in the battle against cancer, art therapy can help those who care for those who are ill. This is true whether or not the carer is a professional – such as a nurse – or a loved one of the person battling the disease. The researchers stated that families and oncology professionals can experience negative effects while caring for someone who is ill – including compassion fatigue, not having enough time to self-care, and (in the case of family) financial concerns. In the study, a total of 34 caregivers enjoyed 45 minutes of art therapy, creating art and discussing its significance afterwards. Before and after each session, participants were given surveys to report positive and negative feelings (including stress and anxiety). After art therapy, they expressed increases in enjoyment and positivity, and a decrease in negative emotions.

Research has shown that art therapy can help cancer patients battle anxiety and depression. Art has also been found to be beneficial to carers, who can face significant stress when a patient or loved one is diagnosed with cancer. Art is increasingly being used to boost the quality of life of cancer patients, and reduce the stress associated with the disease itself and its treatment.